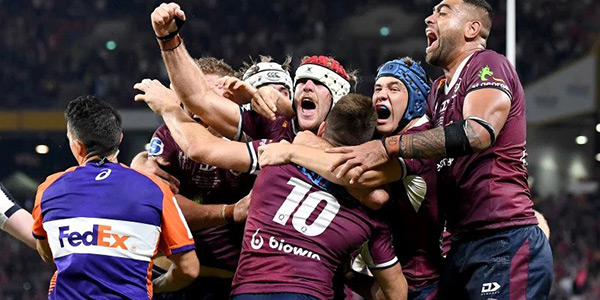 It was a record-breaking finale to the Harvey Norman Super Rugby AU season with the biggest crowd for an Australian derby in almost 20 years, as the Queensland Reds took home the title at Suncorp Stadium in front of 41,637 people.

Saturday night’s television audience for the season finale peaked nationally at a staggering 464,000 during the dramatic final stages, with the average audience up 232% from the 2020 Final which was also played between the two sides.

Biowin has in place a two year sponsorship deal with the Queensland Reds, and the results thus far have been nothing but incredible.

Managing Director Raj Guruswamy was there to witness the nail-biting finale, “there might have been some tense moment, but we never really doubted the result,” he said. “Part of the reason we wanted to partner with the Queensland Reds was that they represent the values of our company. They’re young, resilient and have shown that they are willing to work hard to achieve their goals.”

The crowd at Suncorp Stadium on Saturday night was the one of the largest for an all-Australian derby in Super Rugby history, just short of the 42,237 that witnessed the Queensland Reds against the NSW Waratahs at the same venue in 2004.

The Australian sides will now launch into the Harvey Norman Trans-Tasman this weekend with the Queensland Reds kicking off the season against the Highlanders at Forsyth Barr Stadium in Dunedin on Friday night, ad-free, live and on demand on Stan Sport from 5pm AEST.